There is a new idea in Salem in the form of House Bill 2632. Check out this short story from the Oregonian and if you are in support, contact your legislators and let them know today!

Oregon House will vote on bill to divert $4.5 million from PDC to schools 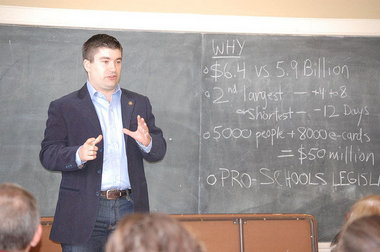 SALEM — Because of Oregonâ€™s quirky property tax system, a bill heading to the floor of the Oregon House
could simultaneously lower property taxes in Portland and boost funding for schools.

That contradictory effect is the result of the interplay between the taxing authority of Portlandâ€™s urban Â renewal agency, the Portland Development Commission and Portland Public Schools.

Currently,Â the PDC can divert funding from other property tax districtsÂ such as the city of Portland, Multnomah County and Portland Public Schools. And because the agencyâ€™s taxing authority predates 2001, Â  Â  it can also divert money raised by local option levies.

House Bill 2632Â would remove that authority. It would affect nearly 100 urban renewal agencies statewide, Â  but the vast majority of the monetary impact would be seen in Portland, where the PDC currently diverts Â  Â $7.5 million from Portland school levies.

If the bill passed, that $7.5 million would be sent back to schools. Along the way the tax would be subject to â€œcompressionâ€ thanks to Oregonâ€™s property tax limitations, resulting in $4.5 million in new revenue for Portland Public Schools and a $3 million tax cut for property owners.

â€œWe think the voters want that money to go to education and we want to find a way to get that back,â€œ said David Williams, a lobbyist for Portland Public Schools.

Thereâ€™s one glitch left to work out. Multnomah County thinks it could cost up to $300,000 to reprogram the countyâ€™s tax assessment system to handle the complex transaction.

The House Revenue Committee unanimously approved the bill Wednesday morning, acknowledging that the Senate may need to amend the law to make it phase-in over time, allowing for tax assessors to upgrade software.

Thatâ€™s a small price to pay for a $4.5 million shot in the arm to schools, saidÂ Rep. Jules Bailey, D-Portland.

â€œWe shouldnâ€™t let a small one-time cost in administration get in the way of getting more money to schools and critical services,â€ Bailey said.

A Better Way Forward Proposed by Our Oregon

The Election is almost here – ways to support the bond.

3 days into school, 3 opportunities to help!